Since May 2013, our mobile Thazhumbakam exhibits have been showcased at several university and community events geared towards Tamil genocide awareness.

The Thazhumbakam mobile exhibits have also been displayed at the 2nd International Conference on Tamil Nationhood and Genocide in Sri Lanka, which took place in May 2018 in Ottawa, Ontario.

Pictures of these exhibits can be found in the gallery section of our website.

MACABRE OF THE SILENCED 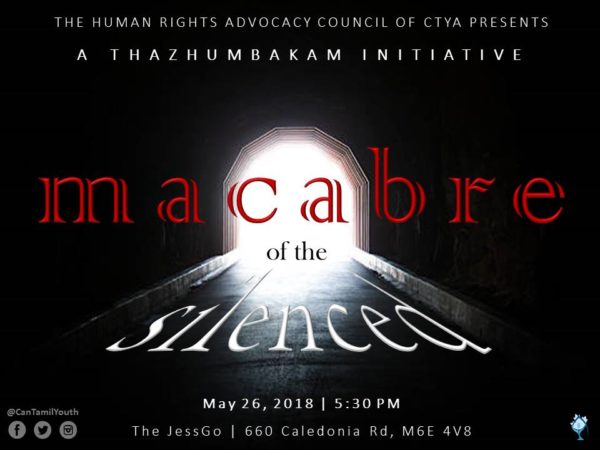 Macabre of the Silenced was hosted by the Human Rights Advocacy Council of CTYA, and is an initiative of Thazhumbakam – the Tamil Genocide Memorial Museum. This exhibit was dedicated to Tamil Genocide Remembrance Month and post-2009 Sri Lanka. 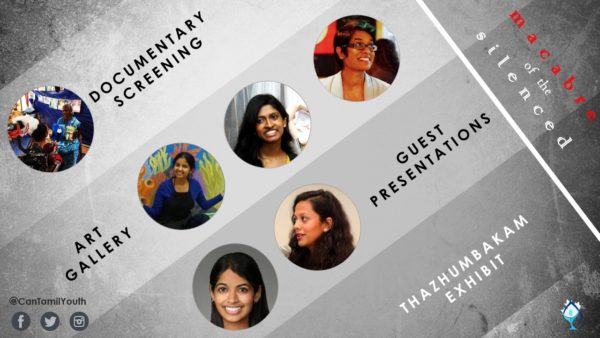 Dharsha Jegatheeswaran is a Tamil-Canadian lawyer who, after being called to the Bar in the province of Ontario in June 2016, has been based in Jaffna since August 2016 helping set up the Adayaalam Centre for Policy Research (ACPR, @adayaalam_cpr), of which she is Research Director. ACPR aims to fill a critical need for a think-tank, based in the North-East that reports and presents analyses from a Tamil perspective in a manner which genuinely and sincerely reflects the war-affected Tamil communities’ views and priorities. While at ACPR, Dharsha has written multiple reports and briefs on security sector reform and proposed transitional justice legislation, as well as run multiple capacity-building programs including for university students, journalists and families of the disappeared.

Dharsha was formerly the Human Rights Director for Washington-based NGO, People for Equality and Relief in Lanka (PEARL). Dharsha holds a Juris Doctor (J.D.) from the University of Toronto Faculty of Law and a H. B.Sc. from McMaster University. She has conducted research and advocacy for multiple Tamil diaspora advocacy organizations and has attended the UN Human Rights Council numerous times as an advocate on Tamil issues. Dharsha also worked as a legal intern at the Colombo based Centre for Policy Alternatives in 2013 and co-authored a comprehensive report on illegal land acquisitions. Dharsha’s research interests lie in accountability, justice and security sector reform.

Tasha Manoranjan (People for Equality and Relief in Lanka):

Tasha Manoranjan is the founder and executive director of People for Equality and Relief in Lanka (PEARL, @pearl_action), a non-profit advocacy organization dedicated to promoting human rights in Sri Lanka. She spent over a year documenting human rights violations committed against Tamil civilians in northern Sri Lanka, and remains committed to pursuing accountability for violations of international law.

Tasha is an associate in Sidley Austin LLP’s Litigation Practice. Tasha received her B.A., magna cum laude, in Justice and Peace Studies from Georgetown University’s School of Foreign Service. Tasha earned her law degree at Yale Law School, where she served as the Features Editor and Book Reviewer for the Yale Journal of International Law, Chair of the South Asian Law Students Association and Community Enrichment Chair of the Women of Color Collective. While at Yale, Tasha wrote a paper entitled “Beaten but not Broken: Tamil Women in Sri Lanka”, which was subsequently published at 11 Georgetown Journal of International Affairs 139 (2010).

International media have turned a blind-eye to issues faced by the Tamil population in the North-East of Sri Lanka. ‘Sri Lanka’s Disappeared’ is a documentary aiming to raise awareness for protests by families with missing loved ones and to encourage support on the issue of disappearances in Sri Lanka.

The makers of this documentary (@47roots) travelled to the North-East of Sri Lanka, where they witnessed protests by mothers in search of their disappeared family members in the aftermath of the Sri Lankan civil war. Women have been heading these roadside protests for a whole year anticipating the state to release lists of detainees and the locations of detention centres as part of their demands. The makers spoke with the mothers and active members of civil society, in order to gain insight into the issues they faced. It seemed that the Sri Lankan government had demonstrated reluctance to address the issue of disappearances head-on, giving false promises to the mothers, and denied accountability. Families of the disappeared, and many in this part of the country, onlook an unpredictable future in their struggle for justice.

Social worker by day, creator by night. Arani Nadesan is not a traditional artist; she uses typography to express herself. She identifies as a strong minority woman, proud feminist, and uses empathy as her superpower. An advocate in invisible illness and mental health, she hopes to educate and inform her community. You can check out Arani’s work on instagram: @aranisartistry.

Keerthana Nagaratnam, also well known as Keera Ratnam, is the owner and artist behind the Waves of Colour art studio. She is a well known artist in the Tamil community who has taught art to over 100 students. She focuses engaging children to story-tell through the form of art. Her work is a reflection on her identity as a Tamil diaspora and how she illustrates the growth of this identity. Check out Keera’s work on instagram: @wavesofcolour.

Keera’s work is displayed annually during the month of May in Thazhumbakam mobile  exhibitions. Displaying a variety of work that connects with the innocent lives that were perished in the homeland. She creates a spiritual connection with her art to the many families here as they mourn their loved ones. As an artist, she contributes to grassroots projects with some schools and learning centers in the homeland in hopes to make a small impact in a child’s life. She hopes to create many artists who express their own identity as Tamil Canadians in the near future and use that as a tool to explain the Tamil history.

Sindu Sivayogam is a visual artist and urban planner/designer living and working in Mississauga. Sindu explores her identity as a Tamil woman through a feminist lens, creating visual interpretations of various issues including patriarchal systems and the militarized state. She approaches her work with the goal of striking a personal harmony between her identity, her politics and her culture. You can explore her work on instagram: @murukku and at iamsindu.com